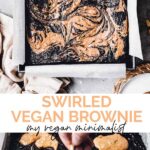 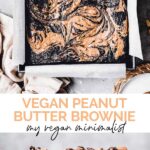 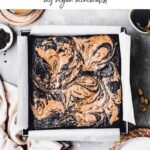 Why this recipe works

Wondering why you should pick this exact recipe? Let me tell you!

Coffee: You will need instant, not regular ground coffee as this needs to fully dissolve.

Chocolate: I used a mix of dark and milk (vegan) chocolate.

You will also need the following equipment:

Here's my little visual guide to making this super easy brownie. You can find all the measurements in the recipe card below.

For best results, you'll want to follow these expert tips when baking the brownie.

The heat from the boiling water will create a jelly when combined with your ground flaxseed. Moreover, the warmth will also help dissolve your sugar, which will help create the fudgy flavour in your brownie.

Do not over mix. It’s key not to overmix this batter. Doing so will create a rubber-like brownie. It will also prevent the rise and crumb structure of your brownie.

Once you’ve folded in the dry ingredients and you don’t see any more flour or cocoa stop mixing immediately. Read more about the importance of not overmixing your batter here.

Don’t overbake. When baking cakes, the general rule for checking whether or not it's fully baked is to insert a wooden skewer. If the skewer comes out clean, the cake is baked.

However, the same rule does not apply to baking brownies. You'll want the brownie to be gooey, so the skewer needs to come out gooey, with a few bits of crumb here and there. This way your brownie will be fudgy once cool.

Why has my brownie sunk?

If it has sunk in the middle, then you’re actually doing a good job. This way it will be gooey in the middle.

However, if you’d still like the brownie a bit less gooey and more fluffy, bake it for a bit longer next time and that should do the trick.

Why is my brownie dry?

If the brownie is dry in the middle it has most likely been baking for too long. This will create a more cakey texture and the high cocoa content will give the brownie a dry texture when eating.

You might also have added chocolate that was very high in cocoa (over 70%) and low in sugar which will make the brownie taste drier.

Why is my brownie not set in the middle?

It might have been slightly underbaked so if you have just taken it out of the oven, simply pop it back in and bake for a little longer.

If not, try putting the brownie in the fridge overnight which will harden all the chocolate in the batter.

If you switched out some dark chocolate for white, it could have slackened the batter too much. Again, try and set the brownie in the fridge overnight.

How do I store my brownie?

You’re best off storing your brownie in an airtight container at room temperature for up to 3-5 days.

If you prefer a more set brownie structure you can store the brownie in the fridge for approx. 5 days.

Can I freeze my brownie?

Yes! This brownie is perfect for freezing, especially because this recipe makes 16 portions.

Cut the brownie into pieces (the size you’d like to serve) and store in an airtight container in the freezer for up to a month.

To keep the pieces from sticking together, separate the brownie pieces using baking paper. When you’re ready to eat your brownie, defrost at room temperature for 4-6 hours.

Or, simply defrost in the microwave (use a Defrost setting) and serve with dairy-free vanilla ice cream.

Below are a few suggestions on how you could still make a delicious brownie even without having all the ingredients listed.

If you want a milder chocolate flavour, add only milk chocolate to the batter (instead of a combination of milk and dark). You could even add some vegan white chocolate as well.

It will work with any chocolate but will have a more intense flavour if you add dark only. It will also be a bit less sweet than if you've added more milk and/or white chocolate.

You can use any vegetable oil. Try to go for one that has a mild flavour and is light in colour (such as light olive or sunflower). You don’t want to change the flavour of the brownie too much with your oil.

This recipe is very forgiving and will be delicious with any sugar such as white, brown, muscovado, cane, coconut etc. The more fudgy and caramelly you want the flavour to be the darker the sugar should be.

Every sugar will work in varying quantities so feel free to add whichever you have at home. Just make sure to add the same total weight of sugar.

This is the perfect recipe to experiment with in terms of alternative flavours. You can add any essence, spices, nuts, or chocolate chips and it will still turn out amazing. Try orange and pecan, or cherry and almond.

If you liked my vegan peanut butter brownie, I would love it if you checked out some of my other vegan desserts. My personal favourites are my chocolate banana bread, matcha cookies and oat milk pancakes.

Thank you for reading this and if you have any comments or suggestions, please don't hesitate to get in touch via the comments below. I would love to hear from you.

The form you have selected does not exist. 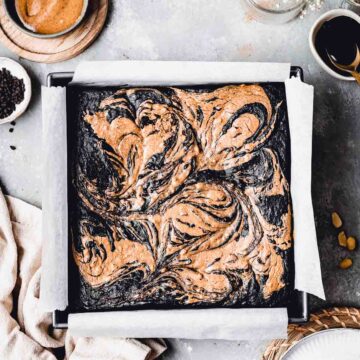 I'm Tajda (pronounced thai-dah) and I'm here to take you on a delicious plant based journey! My recipes are easy to make, affordable and always vegan.